Huts built from mammoth bones found along the Dniepr river valley of Ukraine (and also at locations in Moravia, Czech Republic, and in southern Poland) may be the earliest structures built by prehistoric man, and thus the earliest examples of architecture. 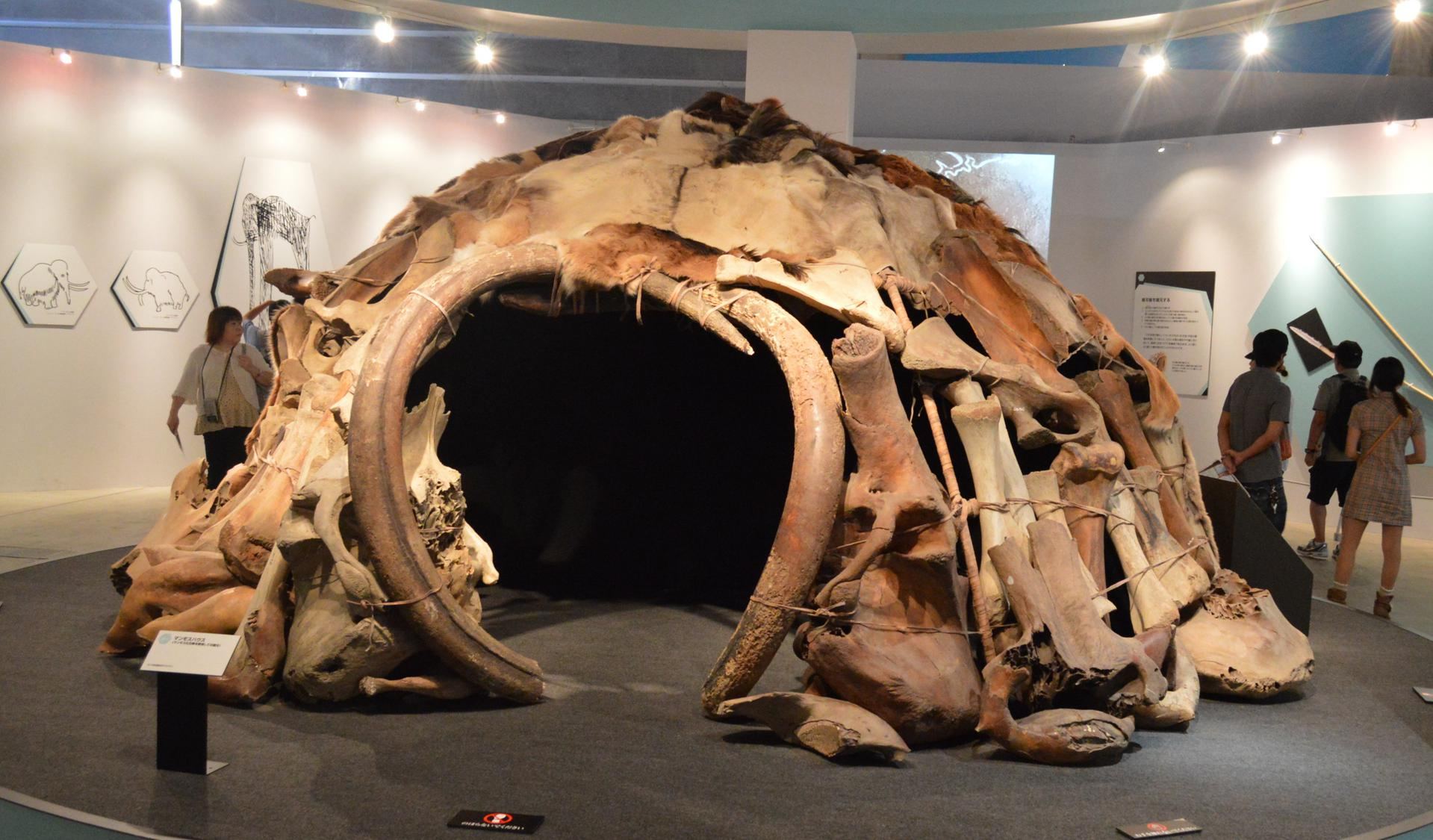 Perhaps the earliest example of domed architecture, the mammoth huts found in Mezhyrich, Ukraine, could be up to 25,000 years old. “Mammoth House” as shown at the “Frozen Woolly Mammoth Yuka Exhibit” in Yokoyama, Japan in Summer 2013. Photo: NANDARO/WIKIMEDIA COMMONS/CC BY-SA 3.0

Some of the most notable of these mammoth bone huts were found in Mezhyrich, a village in central Ukraine, where in 1965, a farmer dug up the lower jawbone of a mammoth while in the process of expanding his cellar. Further excavations revealed the presence of 4 prehistoric huts, made up of a total of 149 mammoth bones.

These shelters date between 23,000 BCE and 12,000 BCE, and are thought to be some of the oldest dwellings known to have been constructed by pre-historic man, usually attributed to Cro-Magnons.

“They are composed of several hundred bones and tusks arranged in a rough circle, between 6 and 10 m (20 and 33 ft) in diameter. A hearth typically lies near the center of the former dwelling, and stone tools and other debris are scattered within and outside the structure. Large pits filled with stone tools, bone fragments and ash have been found near the houses. 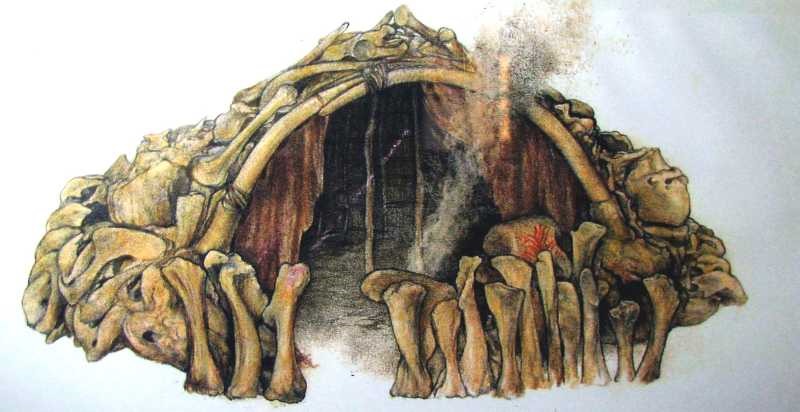 “Considerable effort must have been required to assemble these structures. Even in a dry state, large mammoth bones weigh hundreds of pounds. It has been suggested that the bones and tusks were recovered from hunting episodes in which entire herds of adult mammoth and their young were slaughtered. A more likely explanation is that they were gathered from natural accumulations of bones perhaps at the mouths of streams and gullies near the sites. The primary purpose of the mammoth-bone dwellings which were presumably covered with animal skins, was probably shelter from extreme cold and high winds. Some archaeologists, impressed with the size and appearance of the structures, have argued that they also possess religious or social significance. The have been described as the earliest examples of ‘monumental architecture’ as evidence of increased social complexity and status differentiation during the final phase of the Ice Age.” (Paul G. Bahn (ed) 100 Great Archaeological Discoveries [1995] 54-55) 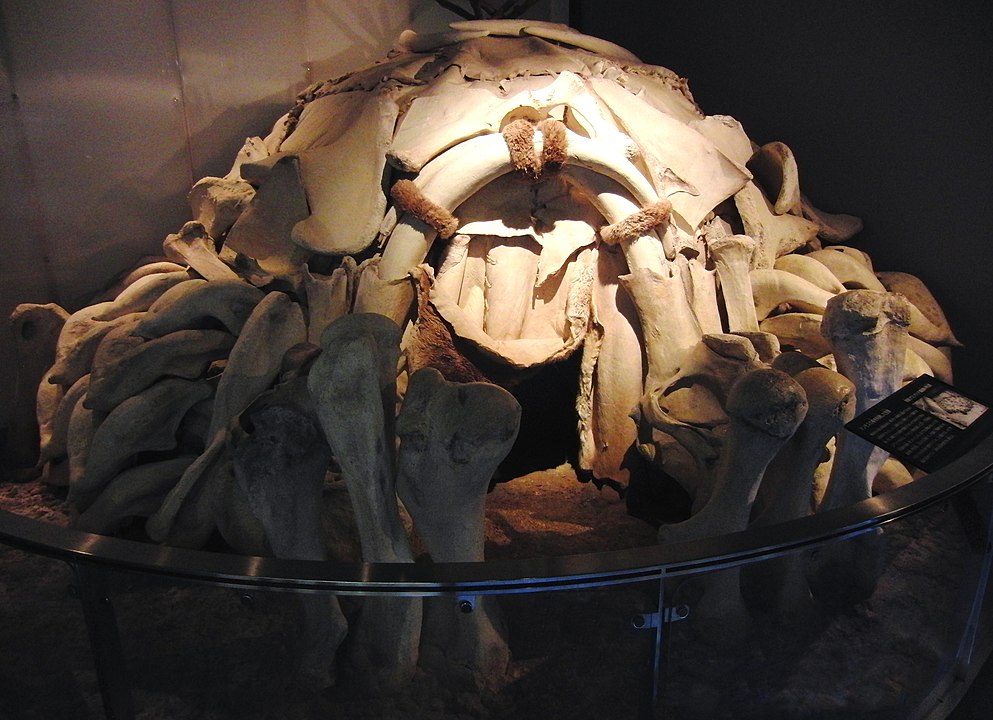 Mammoth bone dwelling. Reconstruction based on the example of Mezhirich. Exhibit in the National Museum of Nature and Science, Tokyo, Japan. Photo: Momotarou2012/WIKIMEDIA COMMONS/CC BY-SA 3.0

Other interesting objects have also been found on the site, including a map inscribed onto a bone, presumably showing the area around the settlement. The remains of a “drum”, made of a mammoth skull painted with a pattern of red ochre dots and lines, were also discovered, along with amber ornaments and fossil shells. 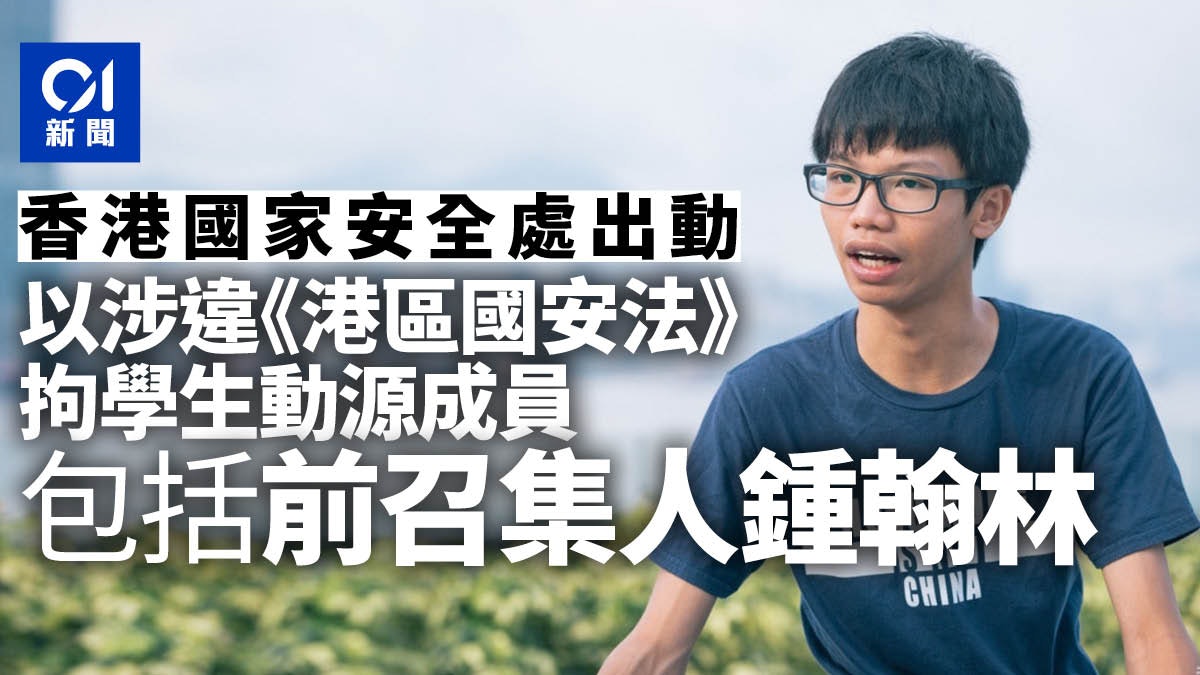